Topical articles from members of our community.

At a time when Republican culture warriors have been trying to make “Merry Christmas” the country’s only acceptable yuletide greeting (“Happy Holidays” apparently raising fears of a vast anti-Christian conspiracy), we Democrats have reason to observe another seasonal tradition—the New Year’s resolution; if only to help put such petty, partisan distractions behind us.

Indeed, the occasion for this tradition becomes all the more urgent in view of a litany of ongoing threats to our democracy in the form of bogus charges of election fraud, resistance to preventative treatments for a raging pandemic, a general flouting of science and the rule of law, and a daily erosion of standards of civil discourse.

As Democrats, our response on every level—national, state and local—must be to counter such efforts with a steady stream of truth-telling: testifying to the fair and decisive results of the 2020 election, promoting the use of authorized vaccines and precautions, insisting on the prosecution of all those involved in the deadly insurrection of a year ago, and expressing our solidarity on a wide range of issues.

To this end, the editors of this newsletter hereby invite its readers to submit essays up to 500 words in length on topics of their choice, the text of which to be included in the body of an email and sent to: editor@sagadahocdems.org. Please specify the name to appear in a by-line, and also please note that while incisive argument will be welcomed, vitriol will not. Due to space constraints, articles may be held for publication in later editions.

As we embark on this effort to help repair our country’s moral and political infrastructure, let our resolution echo the words of one of our most revered presidents, as follows: “That we here highly resolve that these assaults on our democracy shall not go unanswered, and that government of the people, by the people, and for the people, shall not perish from the earth.”

As if the last year’s Republican assault on the Capitol were not appalling enough, Maine Democrats now learn that Paul LePage, who openly refers to himself as “Donald Trump before Donald Trump,” is waging a third campaign for governor.

As governor, LePage’s slogan was “Put Maine People Ahead of Politics” yet he went on to rail against Democrats as “crazy socialists,” vetoing every bill they put forward in his attempt to force the elimination of Maine’s state income tax. In total, LePage vetoed 642 bills, legislation designed to benefit Mainers across the political spectrum: protection of Maine’s fisheries against invasive species, life-saving treatment for drug overdoses, and improved background checks for childcare facilities. At the same time, he simply ignored voter-approved referendums, insisting that they were merely “suggestions,” not mandates—a clear breach of Maine law. 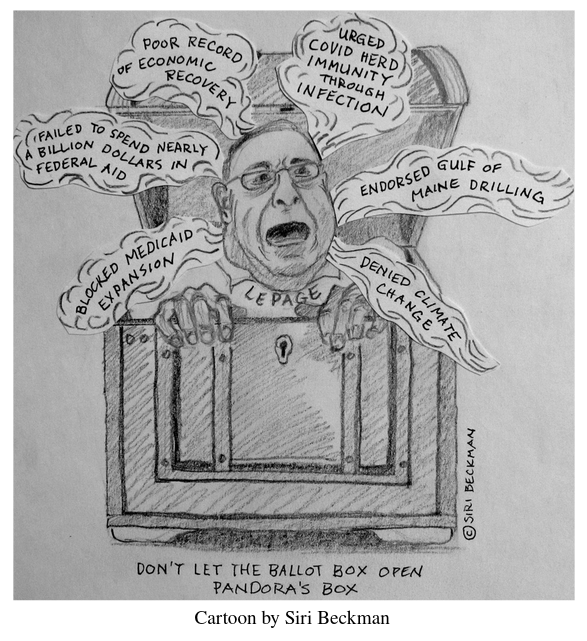 How would Maine fare under LePage during the covid crisis? As governor, he vetoed five bills and a voter-approved referendum supporting Medicaid expansion, denying Mainers billions of federal dollars in aid. Like Trump, LePage ignores science, choosing “solutions” that serve his own political ends. Rather than mask and vaccine mandates, for example, LePage proposes, “What you should do is let them all have it, get that natural immunity and that’s when you’re going to achieve herd immunity.” This at a time when in states with low vaccination rates omicron has increased 1000% in two weeks and pediatric admissions are soaring. The guinea pigs here would be Maine’s children.

And yet LePage continues to enjoy strong support among Republicans in the 2ndCongressional District, while Governor Mills is widely viewed as a soft candidate. A recent survey showed that “44% of Maine registered Democrats were either undecided about voting for her or tending toward Maine Senate President, Troy Jackson. By almost two to one, voters who do not support LePage would choose Jackson over Mills.” (SurveyUSA).  The good news is that Jackson has stated that he will not challenge Mills in her campaign for re-election: “Though we may have our differences, Governor Janet Mills has been a strong leader throughout a once-in-a-lifetime public health crisis and has been an integral partner on many issues I care deeply about. She has my support in 2022.”

As attorney general, Janet Mills stood tough against then-Governor LePage’s uninformed, extreme, and self-serving policies, and on her first day in office ordered the implementation of Medicaid expansion. She has supported Mainers throughout the severe challenges of Covid and climate change, with solutions that have often required forced choices. In ways that her predecessor could only pretend to, she has put Maine’s people ahead of politics and shown that successful governance requires flexibility, input from divergent perspectives, and educated responses.

The upcoming 2022 election will not be easy for Democrats. We must fight hard, and remain united, for fragmentation at this stage would be a recipe for disaster. Remember, in 2010, Paul LePage won with just 38% in a five-way race.

As a lifelong progressive Democrat, I am very concerned. I see rigid lines being drawn within the party. I hear a deep animosity toward Joe Manchin and Kyrsten Sinema from many, and I understand why. I’ve done a lot of soul-searching these last months and a good bit of pragmatism has found its way into my thinking as we look to the 2022 and 2024 elections.

Dems, we need to get out of our silos. We are becoming too rigid in what we want our elected officials to do. We and they are not willing to budge under any circumstances. This is an attitude that will get us nowhere and could result in Paul LePage’s winning the governor’s race once again and a Republican in the White House.

My hope is we can come together as a party. To do this, we don’t need to give up our dreams for the country. We do, however, need to accept reality. Is it not possible to select fewer goals that can be accepted by all of us? We don’t have much time left before we lose the House and possibly the Senate. Let’s concentrate on what we can do and then get it done: voting rights, child tax credit, universal pre-K, and climate change. It doesn’t matter if we agree on one, two, three, or four of these goals. Any of them will bring lasting and monumental changes for the country. Children will be brought out of food insecurity and poverty. Primary caregivers will be able to return to the workforce knowing that their children are safe in school. More of the population will find it easier to cast their votes, and the planet could be on its way to salvation. This is a win-win for everyone.